So I've been hearing a lot about the apparently yummy bubble tea lately. Now I'll be the first to admit, so excuse my upcoming clueless moment, but I  thought it was just some plain old tea with a bubbly froth or such? But don't worry I have since found out otherwise:) Today I began doing a little research as to what exactly bubble tea is, and I found out that it actually does sound exceptionally yummy and now I want/need some..haha:) So my next question is where do they sell this stuff, and where in the world do you buy tapioca pearls? Also, has anyone every tried this tea or made some themselves? Below I've included some pictures that I found over on flickr to give you an idea as to what bubble tea looks like, just in case you were clueless like me:) Sure looks tasty!! 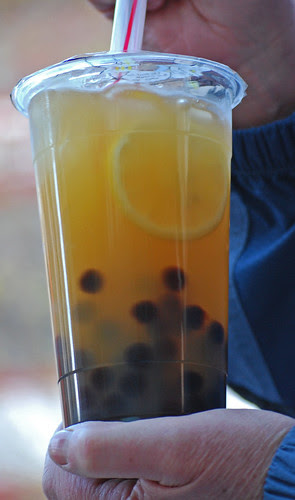 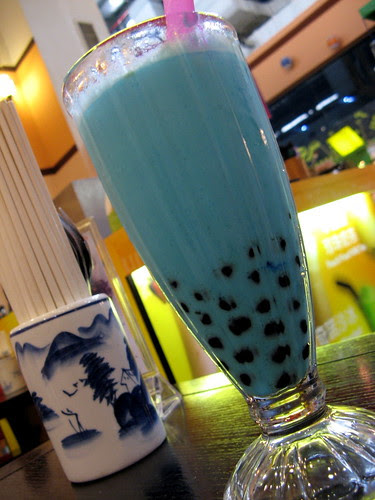 Please click on photo's for direct links to there sources.
Posted by Kim at 3:12 PM

I haven't tried making bubble tea myself, but I've had it about a half a million times! It is yummy. The tapioca pearls are a little gummy and chewy (wow, that doesn't sound too appetizing, does it? It's yummy I promise!)

Luckily, my little part of the world is heavily influenced by Asian culture so there are plenty of bubble tea shops everywhere (and sushi too.. it's awesome)! I would try googling bubble tea and the name of your town to see what comes up.

I've seen tapioca pearls in Asian markets/grocery stores, but again, that could be because of where I live!

I was only introduced to bubble tea a couple of months ago, I'm yet to try it though. I reeeeally want some, but like you I don't know of anywhere near me that sells it! My sister had some from somewhere though so next time I stay with her I'm going to make her take me to get some! :)
I hope someone posts some more useful information for you, haha!
x Beth

A guy that used to work with my fiancé was bubble tea crazy. He'd leave our store on his lunch and drive down the street to buy some, every day! I don't get it, but then I've never had it either.

I have tried it, it's actually really good. You can find it in most tea rooms/cafes. Some places are specifically "Boba Tea" places, like here in Dallas.
You can do a search for "boba tea" or "bubble tea" (it's referred to as both)for places near your area.
There is also an online supply store with different recipes for making bubble tea. But I have not tried to make my own.

Where I am from (Southern California) this is called Boba. I LOVE boba, but it is definitely something that some people can't stand because of texture and stuff. There are stores all over the place around here like "Boba Loca" and "Scotty's" that sell it in many flavors. The Milk or Thai Tea is really good. As for the Tapioca balls uncooked, I am not exactly sure where to do buy them. Hope that helps!

most Asian markets sell the tapioca pearls & even a 'just add water' mix for the teas!

I'm pretty sure you can buy tapioca pearls in a regular grocery store. (I work as a cashier in a store and I could swear I've seen them before.) Usually down the aisle where you find Jello and pudding. There's a couple different types, too. :)